One of my key learnings from the first assignment in 'Art or Photography' is how pre-visualising and sketching images before the 'execution' - the act of actually capturing the photograph - is that often this preparation leads to quite unexpected results which are often better than the pre-visualisation. Here's two examples:

This idea for 'curves': 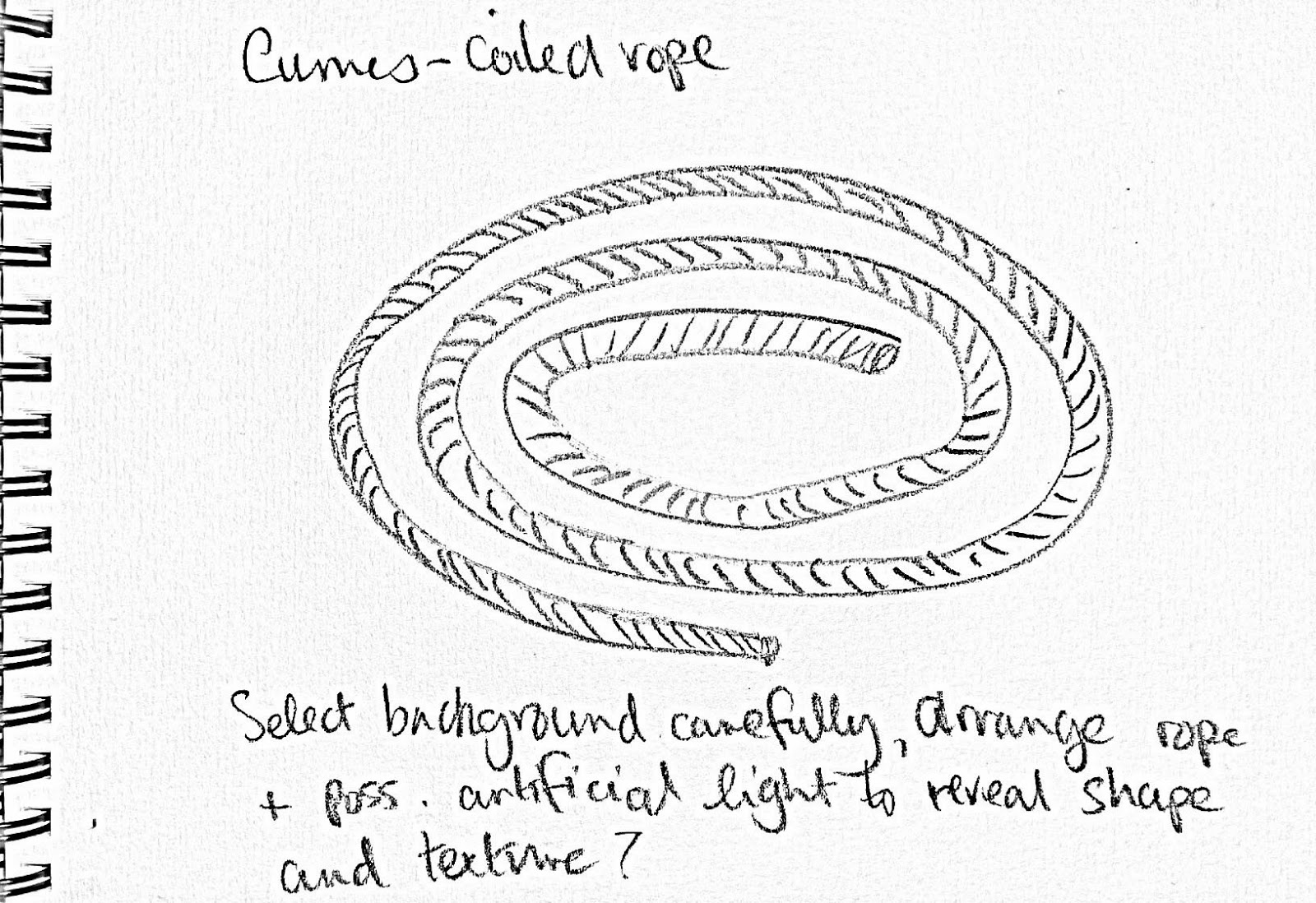 This idea for 'lines': 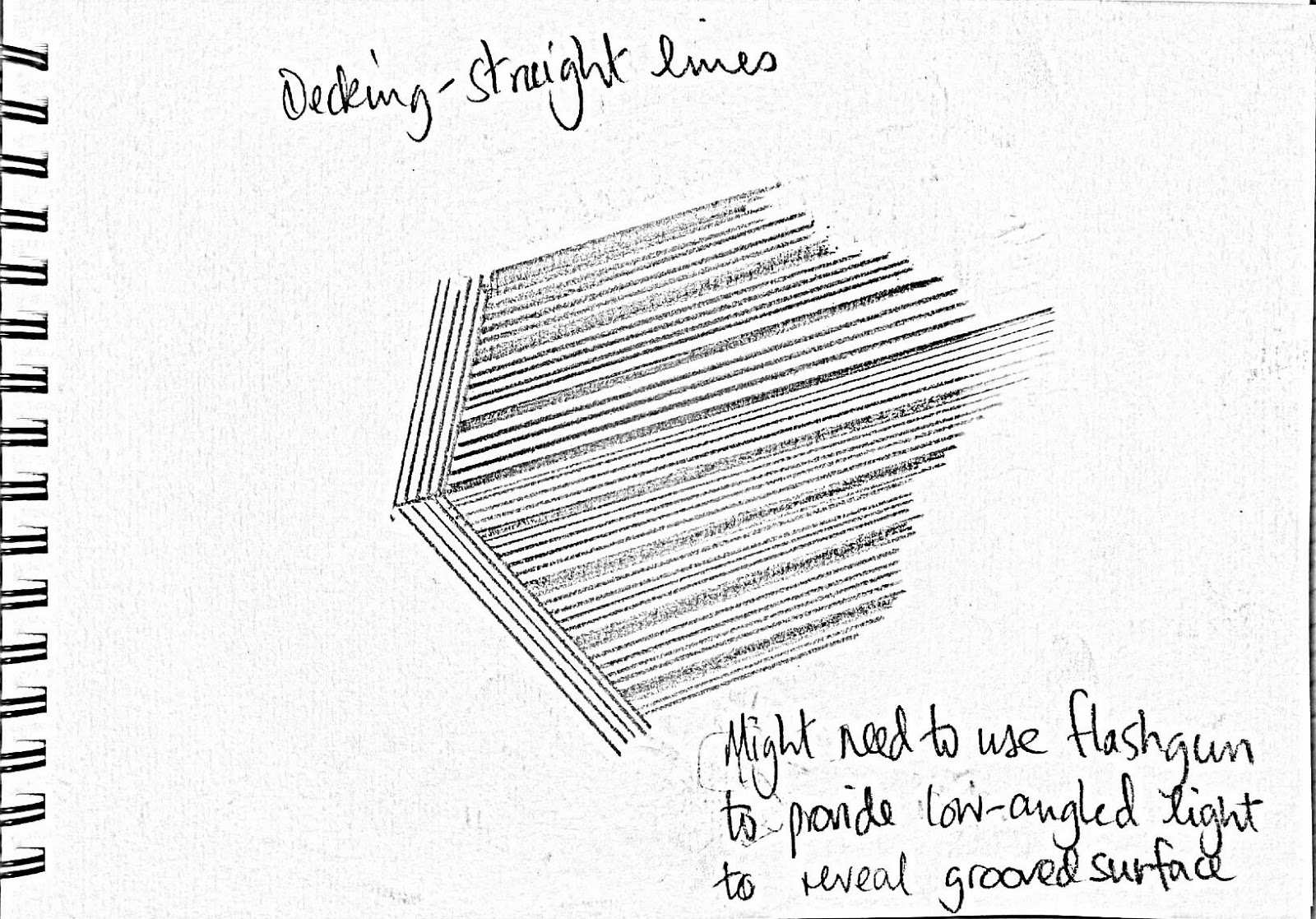 Became:
I am not quite sure what's happening here, but it's not the first time this has happened to me. One theory is that by having sketched out some ideas, subconsciously I can relax and in so doing become more receptive to other ideas - both the images above were obvious but I never noticed them until I tried to capture the ideas I had sketched out.

It's a bit like when you try to remember something but no matter how hard you try, you cannot. Then, later, when you are thinking about something completely different, the thing you were trying to remember just pops into your head.
Posted by Tim Tucker LRPS on Monday, February 24, 2014 1 comment:

I learnt from reading Michael Freemans' book The Photographers Eye that the 'Contrasts' task is nothing new, as it actually dates back to Bauhaus circa 1920. There it was a task set by Johannes Itten, the Swiss expressionist painter, as part of the 'Basic Course'.

Getting close to the deadline for the 'Contrasts' assignment, so been thinking of things that I can shoot as close to home as possible. On the theme of straight lines and curves, came up with these sketchs of ideas:

Posted by Tim Tucker LRPS on Wednesday, February 19, 2014 No comments:

I have been reading 'The Photograph' by Graham Clarke, supplied with my course materials. Had a strange thought that the effect of the launch of the Kodak Brownie in 1900 may be somewhat mirrored in what's happened in the last decade or so with the smartphone and Internet.

The Brownie put cameras into the hands of many more people: for almost 60 years previously it had been the preserve of those that could afford to make or commission a camera, which was more like a hand-crafted piece of furniture than a tool.

112 years after launching the Brownie, Kodak filed for Chapter 11, so I wonder how 100 years from now how people will reflect on the impact of the smartphone / Flickr / Instagram / citizen-journalism generation on photography. I also wonder who will have survived from the current crop of manufacturers, if any, because, as Thom Hogan says here, it's just possible you already have the last camera you'll ever need...

Here's some shots from Birmingham, where I had travelled to try and capture some contrasting views of the developed and undeveloped parts of the city.


With this picture, and the one below, I was hoping to show the contrast between the run-down and re-developed parts of the city. I like the fact that both have signs that promise so much - one making promises that clearly cannot be delivered on any more, and the other make a promise that is, well, superficiously enticing.....


Shot as a pair with Sign of the times 1, I can't help feeling the sign's 'promise' is a little surreal, hence the unrealistic HDR processing of the image. Both sites face each other across open land.

Above was another idea to contrast the developed and un-developed parts of the city. I applied a little HDR in Photoshop - I wanted this to look a bit like an artists impression or one of those scale models made to show what the development would look like. This site is between the Eagle and Tun and The Hive (first two images).


Another shot whilst exploring Birmingham - not particularly on-topic of contrasts, but I just liked the possibility of a mis-spelt name, and as the person came along I included them for a sense of scale.

All of the images in this shoot were taken with a Nokia Lumia 1020 smartphone, see my review here.
Posted by Tim Tucker LRPS on Monday, February 10, 2014 1 comment:

Click the logo below to go to the OCA site